You may be tempted to use chemicals to control pests like ground moles. However, using chemicals has its own risks that you need to consider. For example, using chemical pesticides can result in the death of other beneficial insects in your garden and lawns.

If you have noticed holes on your lawn or you have seen the ground moving, then your yard is likely infested by moles. While getting rid of these pests is difficult, there are several natural remedies that can help you solve this problem. You should know that controlling moles is not an easy task, so you’ll need to be patient and persistent.

10 Ways to Get Rid of Ground Moles Naturally

Getting rid of ground moles is a tall task for many homeowners. This is because these rodents can cause much damage to your lawn and gardens. The tunnels created by ground moles are usually a nightmare to most gardeners, as they can destroy the structure of your garden or lawn, resulting in unsightly brown patches.

The fact that ground moles are nocturnal animals makes it difficult to get rid of them. However, this should not discourage you from getting rid of pesky animals. There are several ways that you can use to get rid of ground moles.

1. How to Get Rid of Ground Moles With Dawn Soap

Dawn dishwashing soap is a hot topic when it comes to getting rid of moles. There are two common ways people use this soap to deter moles: soaking the soil with the soap or making a spray from the soap.

To soak the soil, fill the mole’s tunnels with water and then pour in about 1/4 cup of Dawn dishwashing soap. The soap will seep into the tunnels and coat the inner wall, which can suffocate and kill the mole.

Some people prefer to make a spray mixture using Dawn dishwashing liquid and castor oil or peppermint oil. The theory behind this method is that moles hate the smell of these oils.

To make this spray, mix 2 tablespoons of castor or peppermint oil with 1 gallon of water and 1/2 teaspoon of Dawn dishwashing liquid. Place in a spray bottle and spray on your lawn where you’ve seen signs of moles.

2. How to Get Rid of Ground Moles With Castor Oil

Castor oil has an unpleasant taste and smell that deters moles from entering your yard. It also makes their tunnels collapse so that they cannot move around easily. Simply mix 1 part castor oil with 10 parts water in a spray bottle, shake well and spray on the molehills as well as areas you suspect might have mole activity.

The powdery consistency of laundry detergent will also make it difficult for them to move around in their tunnels, so they’ll be more likely to find another place to live! Just mix 1/2 cup castor oil with 1/2 cup dishwasher detergent and 1-gallon water in a bucket or sprayer.

Spray the mixture into their holes and around your lawn every day until you see results (which should be within a couple of days).

3. How to Get Rid of Ground Moles With Dry Ice

Dry ice is nothing but carbon dioxide in solid form. You can use it to eliminate moles by simply placing them into their burrows. Once the dry ice melts and converts into gas, the gas will kill the moles.

If you want to use this method, make sure to wear protective clothing such as gloves and goggles since it can be extremely cold and harm your skin if you’re not careful. Also, keep children and pets away from dry ice as it is dangerous for them too.

See also  21 Items You Can Put in a Mini Fridge

4. How to Get Rid of Ground Moles With Mole Traps

Moles are subterranean creatures that live off of grubs and worms. They tunnel underground to build their homes and find food, creating ridges and holes on the surface of your lawn. In order to catch a mole, you can use traps that kill or allow you to relocate the animal.

There are many types of traps available at garden supply stores that you can use to get rid of ground moles. You can either opt for a lethal trap or a live one that removes moles without killing them. The former is more effective but less humane while the latter requires some extra effort but is safer for animals. 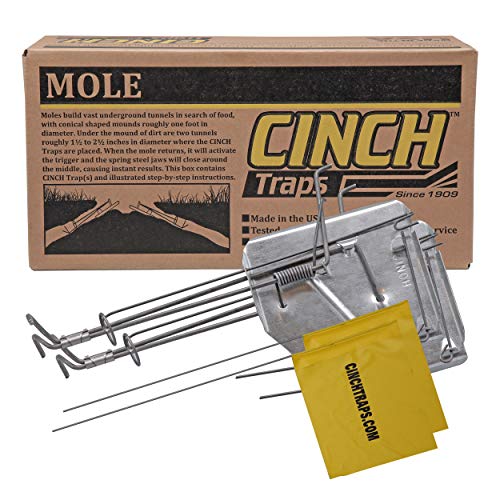 5. How to Get Rid of Ground Moles With Coffee Grounds

Coffee grounds are commonly used as fertilizer because they contain nitrogen and potassium. They also contain caffeine, which is toxic to moles if it builds up in their system after multiple visits to your garden. Because of this, they will avoid any place that smells like coffee grounds.

6. Do Moth Balls Get Rid of Moles in Your Yard?

Mothballs can be used as a natural repellent to get rid of moles. The strong smell of mothballs deters moles from entering your yard, while the chemicals in them are toxic to moles and kill them eventually.

You can place mothballs at the entrance of the tunnels or even inside the tunnel system. Just make sure that you do not use too many mothballs because this could be harmful to children and pets.

You can use this method on all of your known mole tunnels, or just those that are actively showing signs of being used.

7. Get Rid Of Ground Moles With Cayenne Pepper, Garlic & Onions

Being warm-blooded creatures, moles don’t like spicy foods such as cayenne pepper, garlic, and onions because they irritate their mucus membranes and respiratory tract when smelled or ingested by them.

Although they are not harmful to pets and children, they are unpleasant to the moles and will make them find somewhere else to dig.

8. How to Get Rid of Ground Moles With Human Hair

Moles hate the smell of human hair and will avoid places where there is a strong concentration of it around the garden and yard area. To get rid of these pests, place a handful of human hair into mesh bags or nylon stockings and bury these at intervals around your garden or yard area where you suspect there may be mole activity.

Human hair is one of the most effective repellents against ground moles. The hair gives off a scent that mimics the smell of a predator, scaring the moles off before they have time to damage your yard. Ground moles have an extremely sensitive sense of smell and will avoid areas where they can detect human hair.

9. How to Get Rid of Moles in Yard with Tobacco Powder

The nicotine content in tobacco powder is a potent poison for moles and they will avoid it like the plague. Simply sprinkle a small amount of tobacco powder on the molehills and tunnels.

This method kills the moles very quickly, but it is toxic to other animals and humans, so keep pets and children away from the area until the powder has been washed away by rain.

Tobacco powder can be purchased at most hardware stores and can be scattered on the soil around plants and trees in your yard to keep moles out of these areas.

You should reapply the tobacco powder after heavy rains or when it begins to lose its scent, which is generally after about two weeks.

10. How to Get Rid of Moles in Yard with Boric Acid?

If you have a mole problem in your yard, use boric acid. Boric acid is a naturally occurring pesticide that has been used for many years to control pests. It is safe for the environment and does not cause harm to plants or animals.

Use boric acid to kill moles by placing it in their tunnels. The moles will ingest the boric acid and die within two days. Borax is a mineral with a similar chemical structure to boric acid, but it is not as effective at killing moles.

Since boric acid is toxic to humans, you should wear protective gloves when preparing the mixture. You will also need a funnel for pouring the liquid into the mole tunnels.

The recipe for this homemade mole repellent is very simple: mix 2 tablespoons of boric acid with 1 cup of water and pour the mixture into one or more mole tunnels using a funnel or other instrument.

11. How to Get Rid of Ground Moles with Vinegar?

There are two ways to get rid of ground moles with vinegar. You can make a homemade spray, or use vinegar directly.

How to Get Rid of Ground Moles With Vinegar Spray?

Mix 5 oz. of apple cider vinegar and 1-2 oz. of hot pepper sauce in a large spray bottle filled with water and shake well. Spray this solution in the tunnels, holes, and entrances of the moles’ burrows.

How to Get Rid of Ground Moles With Vinegar Directly?

Pour apple cider vinegar directly into the moles’ burrows or holes at nights when they are most active. The smell will irritate them and force them to leave their burrows for good.

In summary, ground moles can be found in any size yard, especially if it is lush and green with a lot of worms. These are their favorite type of lawns because there is plenty for them to eat.